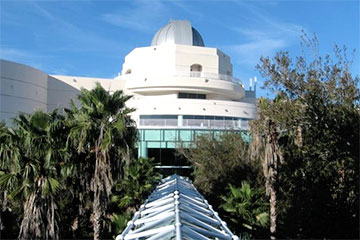 The Orlando Science Center is Central Florida’s award-winning, hands-on science museum. For more than 60 years, our exhibits and programming have brought science to life for not just residents of Central Florida, but also visitors from around the world.

With four floors of interactive exhibit halls, labs and workshops, theaters, an observatory, and experiences that change with the seasons, there is always something exciting for our 670,000 annual visitors to see and do at Orlando Science Center. We also reach 153,000 students and educators each year through our STEM Discovery Center educational programs, both onsite at the Science Center and offsite at schools and community organizations.

The Science Center was incorporated in 1955 as the Central Florida Museum and opened in Orlando Loch Haven Park in 1960. The existing facility opened in 1997 and has undergone numerous major renovations to keep content current and engaging. It is surrounded by the Orlando Museum of Art, Orlando Fire Museum, The Mennello Museum of American Art, The Orlando Shakespeare Theater, and Orlando Repertory Theatre.