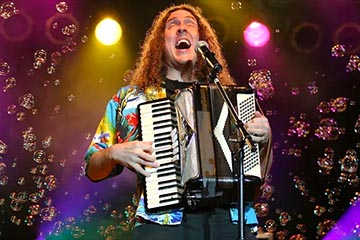 “Weird Al” Yankovic is performing at the Dr. Phillips Center for the Performing Arts in downtown Orlando, Florida on Sunday, October 16, 2022 at 8:00 PM.

Alfred Matthew Yankovic (born October 23, 1959), known professionally as “Weird Al” Yankovic, is an American singer, musician, record producer, and actor who is known for humorous songs that make light of pop culture and often parody specific songs by contemporary musical acts. He also performs original songs that are style pastiches of the work of other acts, as well as polka medleys of several popular songs, most of which feature his trademark accordion. His work has earned him five Grammy Awards and a further 11 nominations, four gold records, and six platinum records in the U.S. His first top ten Billboard album (Straight Outta Lynwood) and single (“White & Nerdy”) were both released in 2006, nearly three decades into his career. His latest album, Mandatory Fun (2014), became his first number-one album during its debut week.