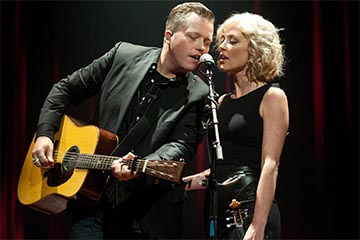 Jason Isbell & Amanda Shires are performing at the Dr. Phillips Center for the Performing Arts in Downtown Orlando, Florida on Thursday, December 10, 2020.

Jason Isbell is originally from Green Hill, Alabama and now based in Nashville. Isbell is a four-time Grammy Award-winning artist and is widely renowned as one of the greatest songwriters of his generation. Garnering immense critical acclaim throughout his career, NPR Music calls him, “one of the finest singer-songwriters working at the intersection of folk, country and rock today. His songs have an exquisite, rawboned realism and deeply embedded class-consciousness,” while American Songwriter declares, “There’s no better songwriter on the planet at this moment, no one operating with the same depth, eloquence or feeling.”

Amanda Shires is an critically acclaimed, Grammy-winning singer, songwriter and violinist. Shires began her career as a teenager playing fiddle with the Texas Playboys. Through the years, she has toured and recorded with notable artists including John Prine, Billy Joe Shaver, Todd Snider, Shovels and Rope, Gregg Allman, Justin Townes Earle, Jason Isbell & the 400 Unit, and more. She has released five albums, the most recent being 2018’s To The Sunset, which was produced by Grammy-award winning producer Dave Cobb. In 2019, Shires formed country supergroup The Highwomen alongside Brandi Carlile, Maren Morris, and Natalie Hemby. The group’s critically acclaimed self-titled LP debuted a #1 on Billboard’s Top Country Albums, and was praised by NPR Music, Rolling Stone, Variety, Entertainment Weekly, Vulture, Pitchfork, Esquire, amongst many others.