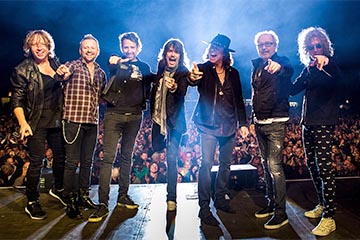 Foreigner is performing at the Dr. Phillips Center for the Performing Arts in Downtown Orlando, Florida on Wednesday and Thursday, May 19-20, 2021.

Foreigner is a British-American rock band, originally formed in New York City in 1976 by veteran British guitarist and songwriter Mick Jones, and fellow Briton and ex-King Crimson member Ian McDonald, along with American vocalist Lou Gramm. Jones came up with the band’s name as he, McDonald and Dennis Elliott were British, whereas Gramm, Al Greenwood and Ed Gagliardi were American.

Foreigner is one of the world’s best-selling bands of all time with worldwide sales of more than 80 million records, including 37.5 million in the US. Leader Mick Jones has been for many years the only founding member still involved.