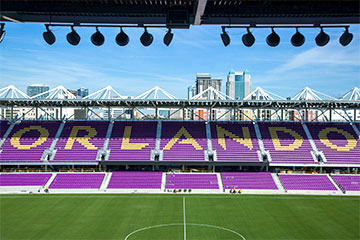 Exploria Stadium, formerly known as Orlando City Stadium, is a 100% privately funded project and home to Orlando City, Orlando Pride, and OCB. The site is two blocks from the Amway Center, within walking distance of the downtown bar district, one of the best locations of any soccer stadium in the country. The stadium has been designed with the intention of creating the loudest and most intimidating atmosphere in Major League Soccer, with North America’s only safe-standing supporter section and a low slanted roofline to amplify crowd noise.