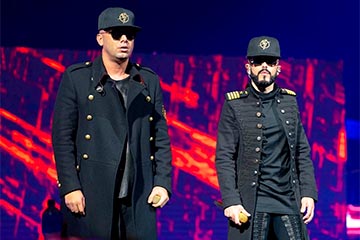 Wisin & Yandel is a Puerto Rican reggaeton duo consisting of Wisin and Yandel. They started their career in the late 1990s and have been together since, winning several awards including a Grammy Award in 2009. They became the first and the only reggaeton artists to win one. In late 2013, they announced they would take a pause in their career as a duo, after their Líderes tour. In a 2014 interview with People en Español, Yandel confirmed that the group would not be disbanding. In February 2018, following a five-year hiatus, the duo announced they would be reuniting, and are set to embark on a world tour, as well as release new music. They sold over 15 million records. In March 2022, the duo announced La Ultima Misión tour, which is to their final tour as a duo and will coincide with a new album.