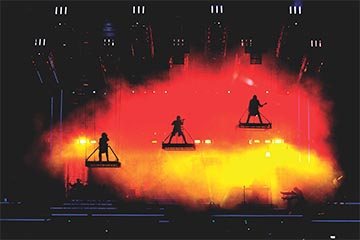 The Trans-Siberian Orchestra is performing at the Amway Center in Orlando, Florida on Saturday, December 17, 2022 at 3:00 PM and 7:30 PM.

Trans-Siberian Orchestra (TSO) is an American rock band founded in 1996 by producer, composer, and lyricist Paul O’Neill, who brought together Jon Oliva and Al Pitrelli (both members of Savatage) and keyboardist and co-producer Robert Kinkel to form the core of the creative team. O’Neill died on April 5, 2017. The band gained in popularity when they began touring in 1999 after completing their second album, The Christmas Attic, the year previous. In 2007, the Washington Post referred to them as “an arena-rock juggernaut” and described their music as “Pink Floyd meets Yes and the Who at Radio City Music Hall.” TSO has sold more than 10 million concert tickets and over 10 million albums. The band has released a series of rock operas: Christmas Eve and Other Stories, The Christmas Attic, Beethoven’s Last Night, The Lost Christmas Eve, their two-disc Night Castle and Letters From the Labyrinth. Trans-Siberian Orchestra is also known for their extensive charity work and elaborate concerts, which include a string section, a light show, lasers, moving trusses, video screens, and effects synchronized to music.

Both Billboard Magazine and Pollstar have ranked them as one of the top ten ticket-selling bands in the first decade of the new millennium. Their path to success was unusual in that, according to O’Neill, TSO is the first major rock band to go straight to theaters and arenas, having never played at a club, never having an opening act and never being an opening act.