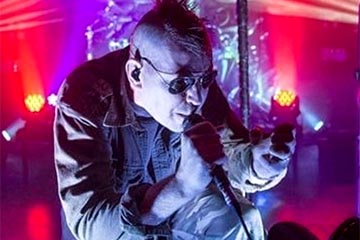 KMFDM (originally Kein Mehrheit Für Die Mitleid, loosely translated by the band as “no pity for the majority”) is a multinational industrial band from Hamburg led by Sascha Konietzko, who founded the band in 1984 as a performance art project. Critics consider KMFDM one of the first bands to bring industrial music to mainstream audiences, though Konietzko refers to the band’s music as “The Ultra-Heavy Beat”. The band incorporates heavy metal guitar riffs, electronic music, samples, and both male and female vocals in its music, which encompasses a variety of styles including industrial rock and electronic body music. The band is fiercely political, with many of its lyrics taking stands against violence, war, and oppression.