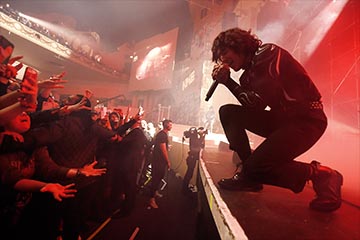 Bring Me The Horizon

Purchase Bring Me The Horizon Tickets

Bring Me The Horizon is performing at the Addition Financial Arena in Orlando, Florida on Friday, September 30, 2022 at 6:30 PM.

Bring Me the Horizon (often abbreviated as BMTH) are a British rock band formed in Sheffield in 2004. The group consists of lead vocalist Oliver Sykes, guitarist Lee Malia, bassist Matt Kean, drummer Matt Nicholls and keyboardist Jordan Fish. They are signed to RCA Records globally and Columbia Records exclusively in the United States. They have received four Kerrang! Awards, including two for Best British Band and one for Best Live Band, and have been nominated for two Grammy Awards. The band has sold over 4 million records worldwide.

Citation: Bring Me The Horizon. Retrieved from: https://en.wikipedia.org/wiki/Bring_Me_the_Horizon