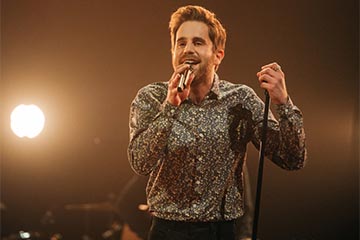 Ben Platt is performing at the Amway Center in downtown Orlando, Florida on Thursday, October 2, 2022 at 8:00 PM.

Benjamin Platt is an American actor, singer, and songwriter. He began his acting career in musical theater as a child and appeared in productions of The Sound of Music (2006) and The Book of Mormon (2012–2015), rising to prominence for originating the title role in Broadway coming-of-age musical Dear Evan Hansen (2015–2017). His performance in the latter earned him multiple accolades, including a Tony, Emmy, and Grammy Award. At 23, Platt became the youngest solo recipient of the Tony Award for Best Actor in a Leading Role in a Musical. Platt reprised the role of Evan Hansen in the 2021 film adaptation of the musical.

Platt’s film credits include the Pitch Perfect film series, Ricki and the Flash (2015), and Run This Town (2019). Since 2019, he has starred in the Netflix comedy-drama series The Politician, for which he was nominated for the Golden Globe Award for Best Actor – Television Series Musical or Comedy.

Platt signed with Atlantic Records in 2017 and released his debut studio album, Sing to Me Instead, in March 2019. In May 2020, a concert film, titled Ben Platt Live from Radio City Music Hall, debuted on Netflix. Platt’s second studio album, Reverie, was released on August 13, 2021.