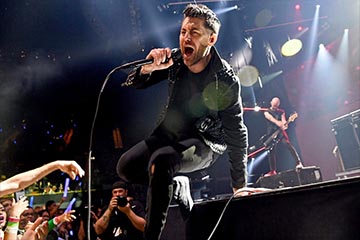 AFI is performing at the House of Blues Orlando in Lake Buena Vista, Florida on Saturday, December 3, 2022 at 8:00 PM.

AFI (abbreviation for A Fire Inside) is an American rock band from Ukiah, California, formed in 1991. Since 1998, it consists of lead vocalist Davey Havok, drummer and backing vocalist Adam Carson, bassist, backing vocalist and keyboardist Hunter Burgan, and guitarist, backing vocalist and keyboardist Jade Puget. Havok and Carson are the sole remaining original members. Originally a hardcore punk band, they have since delved into many genres, starting with horror punk and following through post-hardcore and emo into alternative rock and gothic rock. AFI has released eleven studio albums, ten EPs, one live album and one DVD.