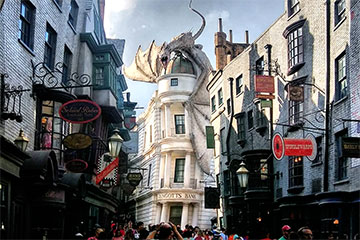 Universal’s Islands of Adventure is a theme park located in Orlando, Florida. It opened on May 28, 1999, along with Universal CityWalk Orlando, as part of an expansion that converted Universal Studios Florida into the Universal Orlando Resort. The resort’s slogan Vacation Like You Mean It was introduced in 2013.

Islands of Adventure is modeled after a journey of exploration, where guests embark on an adventure to visit a variety of themed islands. Initially, the park featured six islands. A seventh, The Wizarding World of Harry Potter, was added in 2010, themed to the highly successful Harry Potter franchise. It was Universal’s largest investment since the resort’s founding in 1990. The expansion led to a significant increase in attendance, and in 2013, Islands of Adventure ranked seventh domestically and eleventh internationally after hosting approximately 8.1 million guests. The eighth island, Skull Island, opened on July 13, 2016, and is themed to the King Kong franchise.