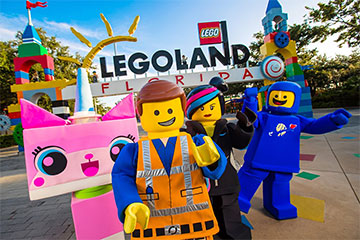 Legoland Florida Resort is a vacation destination in Winter Haven, Florida featuring a theme park, water park and on-site accommodations. It opened as Legoland Florida on October 15, 2011, and later rebranded itself Legoland Florida Resort with the opening of Legoland Hotel in May 2015. The park encompasses 145 acres, making it the second-largest Legoland park after Legoland Windsor in the UK. Built on the site of the former Cypress Gardens theme park, Legoland preserved the botanical gardens and re-themed the water park and select attractions and venues to reflect various Lego brands.

Designed for families with children ages 2 to 12, the resort has more than fifty rides, shows, attractions, restaurants, and shops, plus a botanical garden and water park. The 152-room Legoland Hotel opened May 15, 2015, followed by Legoland Beach Retreat on April 7, 2017, which has 166 rooms in 83 freestanding bungalows designed to resemble giant Lego sets.