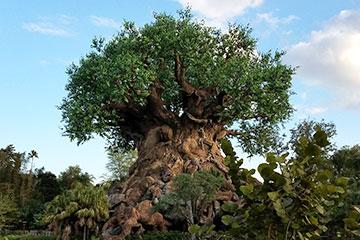 Disney’s Animal Kingdom is a zoological theme park at the Walt Disney World Resort in Bay Lake, Florida, near Orlando. Owned and operated by The Walt Disney Company through its Parks, Experiences and Consumer Products division, it is the largest theme park in the world, covering 580 acres. The park opened on Earth Day, April 22, 1998, and was the fourth theme park built at the resort. The park is dedicated and themed entirely around the natural environment and animal conservation, a philosophy once pioneered by Walt Disney himself.

Pricing and Tickets
Disney ticket prices fluctuate on a daily basis. The price is based on the demand that Disney anticipates for any given day.
Daily ticket price decreases as you add more days.